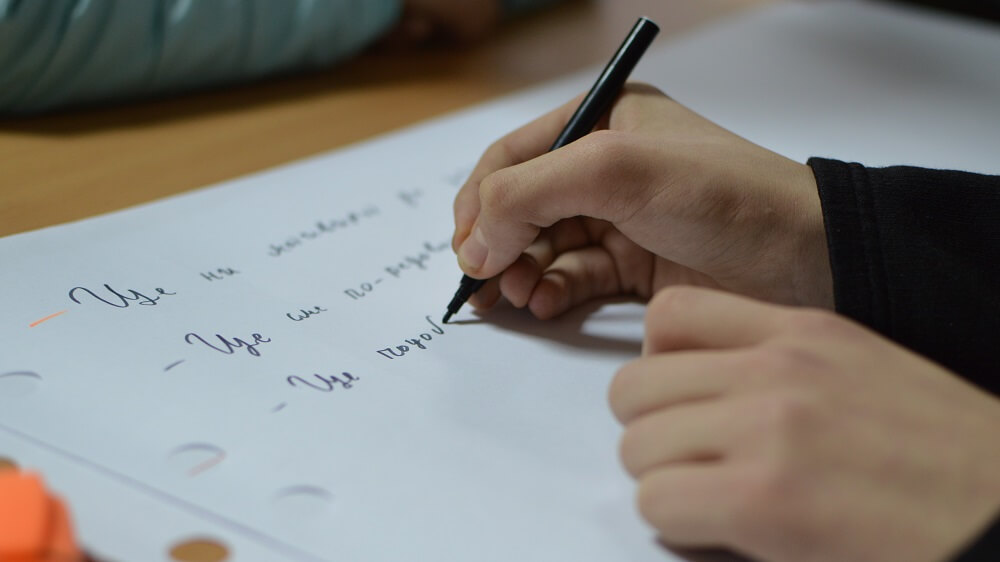 LEARNING AS A GAME

“Children don’t have to realize that they are learning Bulgarian. They need to have the opportunity to use grammar and vocabulary in an authentic context,” Vyara Mihaylova explains. One of the main principles is that words should not be taught in isolation. They need to be introduced in vocabulary networks. The linguist goes on to illustrate this approach by giving an example from the science curriculum for fifth grade.

“You need to introduce the key terminology from the lesson – don’t assume that children know these words just because the curriculum says they should. As a teacher, I would have to go over my lesson plan and outline the ten most important words which are going to make it possible for students to understand this class. Then I’d have to plan an activity to introduce new vocabulary and tap into their prior knowledge. It would be nice to have these words written out somewhere in the classroom – on the whiteboard or on some type of bulletin board. Children need to do several vocabulary exercises like the ones they do in their English classes – open the brackets or cloze tests,” she says.

Then they use these words in educational games in alignment with the principle that if a word is introduced in the most authentic context, students will remember it. “Teachers should not assume that their students know any words which have not been introduced to them in class,” Vyara sums it up. Children should be working in small groups and the main themes should be introduced as an upward spiral – by tapping into and building upon prior knowledge because it would be hard to make them remember something you’ve only mentioned once,” Mihaylova says.

Even though they haven’t been systematized yet, the majority of these principles find their practical application in the classrooms of many Teach For Bulgaria participants. They are able to do that because they have attended training sessions with Vyara and they have also gone through an intensive Summer Institute which has prepared them to tackle similar situations in their classrooms.

CONSTANT AND ENGAGING COMMUNICATION WITH ALL CHILDREN

This is the perfect summary of Vanesa Ivanova’s approach. She teaches first grade at Primary School “General Kartsov” in the village of Hristo Danovo, Plovdiv. All students at the school are Roma.

Her classes start with a dance. The students pick which song to dance to. Then everyone sits down and Vanesa gives them their assignments and gets them to repeat after her. “Today we are going to learn a lesson which is for fifth grade. Why? Because we may be in first grade, but we are what…?,” asks Ms. Ivanova, “Strong,” all children answer. “And because when something is hard, it is also very interesting. This is why we are going to be writing and acting out dialogues today,” the teacher sums up.

She then goes on to provide students with examples of different types of communication. “When Mrs. Dimitrova comes in [the principal of the school], our communication should be…” “Fromal,” several students say. The teacher corrects them and asks them to say when we use formal communication. One student says “when we talk to people we don’t know”, another one says “with the cashmere” (“you mean the cashier,” someone chimes in), “with the doctor,” another student says. Then they discuss informal communication and when we use it (“when we talk to mom, dad, grandpa…”) and finally, the teacher introduces the concept of the dialogue and presents its main parts (greeting, topic, response, and goodbye).

Each of these elements is explained in simple words by the teacher. Then she shows them a video of a dialogue which has been acted out by two of the students and recorded on her phone earlier that day. Students are then given cards with different characters and topics of conversation which they have to glue to color-coded sheets of paper. Once they do that, they discuss what these characters would say to each other and act the conversations out in pairs. Some of them are nervous, but the teacher and their classmates cheer them on.

The entire class is gamified, but this game has a clear logic behind it. When she wants to get her students’ attention Mrs. Ivanova asks them to “throw an eye on her” and they pretend to actually take an imaginary eye and toss it at her. When a student takes too much time to think of an answer or if they just have low energy, the teacher asks the rest of the students to “give them strength” with another special gesture. Every object in the classroom – from the football to the hand sanitizer – has “a guardian”. What is more, children constantly encourage each other and the teacher always tells them they can accomplish even more.

Vanesa Ivanova’s hard work seems to be paying off – most of her students overcome their nervousness and even though they need some time to think, they end up speaking fluently about these topics. But she has been “lucky” to have worked with them since the very first moment they started school. She does have to help them catch up because they do not speak Bulgarian at home and have not attended kindergarten regularly.

Krasimir Krasten from Kazanlak is not so lucky. He was forced to start teaching the basics of the language in eighth grade. He taught the curriculum for second grade in high school for two months. He then did a diagnostic assessment to identify the strengths and areas of improvement for each of his students and tailored his lesson plans to their individual learning needs.

However, this individual approach is not the only strategy he applies in class. He has learned a lot from his preliminary and ongoing training which is part of Teach For Bulgaria’s program. “We create a vision for the class, then we pick a big goal, and get motivated to accomplish it. For example, we say that our big goal is to score an average of 3.5 (out of 6) at the final test. In order to do that, we have to build a strong classroom culture which celebrates everyone’s success. Students create their own rules and “ascend” or “descend” on the scale, depending on their behavior in class. Those who are more advanced help the ones who struggle and they all follow the rules they have voted on and chosen themselves,” the teacher explains.

Imagine how much easier it would be for young teachers like Krasimir Krastev and Vanesa Ivanova – or even for their more experienced colleagues as well – if they had a common methodology to guide them in their work with multilingual children or if they could test their Bulgarian language proficiency level with tried and true diagnostic tools. This is the ultimate goal of EducArt and Teach For Bulgaria. The linguists and experts from the two organizations are working towards the development of diagnostic tools and a series of educational resources with over 1000 pages of exercises and illustrations for multilingual students and their teachers. These resources, however, are not just for minority children. According to Vyara Mihaylova, this methodology can be useful for all children.

“People tend to focus on minority children, but there are many more bilingual Bulgarian children who live abroad, or one of their parents is not Bulgarian, or neither of their parents are Bulgarian, but they live in Bulgaria,” Vyara says. The current methodology for teaching Bulgarian as a second language to preschool students is used in Bulgarian Sunday schools all over the world, according to the linguist.

The benefits of such methodology are endless. Teachers are already looking forward to using it in their classrooms for their students’ sake.

“If we started paying more attention to these students during their primary education, I would be better equipped to help them get to where they need to be in ten years,” Krasimir Krastev concludes.

Support the development of diagnostic tools and methodology for working with multilingual students by making a donation at GlobalGiving.

Find out more about Teach For Bulgaria and EducArt’s project here.

You can find more inspirational stories of Teach For Bulgaria participants who work with multilingual children here and here.

Bilingualism as a Strength (Part One)