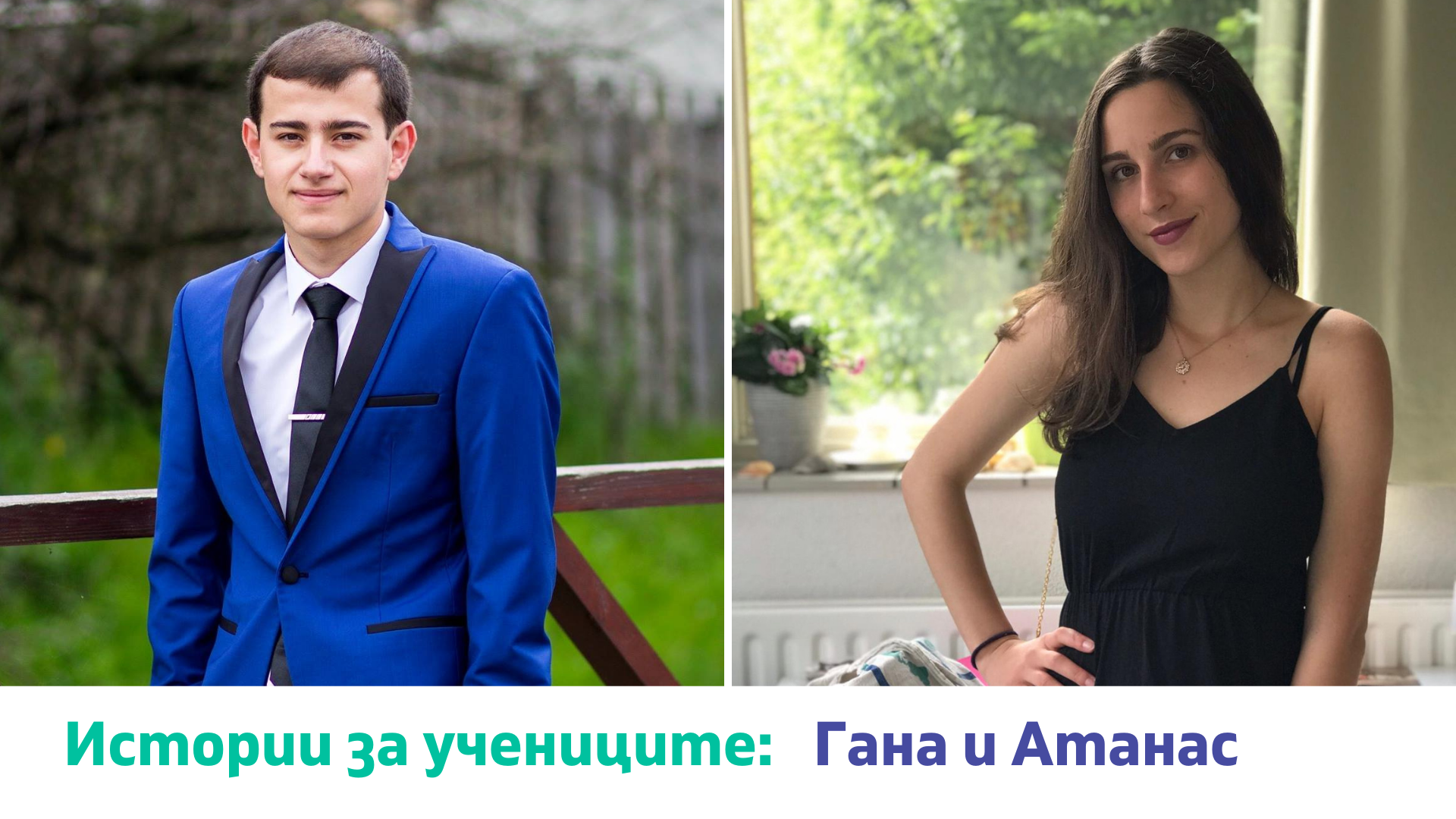 If you closed your eyes, just for a moment, and thought about your teachers, I believe one particular face would come to mind – the teacher who was always there for you, who had always supported you, who never gave up on you, or the one who inspired you.

This story is about such inspiring teachers and about the journey of two children who started from the picturesque town of Koprivshtitsa and traveled the world with full scholarships for the so-called United World Colleges. Today, at the end of their university studies, Gana Radoeva and Atanas Pavlov are two young people full of dreams and gratitude. They are grateful to their families for their support and to their teachers in Koprivshtitsa, New Mexico, Duino (Italy), Plovdiv, and Utrecht for believing in them.

Gana and Atanas have a very similar upbringing. They both grew up in Koprivshtitsa, joined the drama club at school, and volunteered at the Bulgarian Red Cross. They dreamed about adventures, travel, and new horizons.

“We are a great team and we’ve always influenced each other in a positive way,” they said unanimously.

They both received scholarships for the United World Colleges in two consecutive years. Their paths split then – Nasko went to a college in the state of New Mexico in the United States. Then he returned to Bulgaria and decided to go to medical school in Plovdiv. Gani finished her high school education in the Italian village of Duino and then studied global development at the University of Utrecht in the Netherlands. But there was another thing they had in common before their lives split – Ivelina Pashova – the teacher who inspired them to dream big and supported them along the way.

It all started more than 10 years ago when Ivelina Pashova started teaching at Secondary School “Lyuben Karavelov” in Koprivshtitsa as part of the first class of participants in Teach For Bulgaria’s program A New Way to Teaching. Ivelina worked at the school from 2011 to 2017. She was initially an English teacher and then became a vice principal. I talked to her about her students and I couldn’t help but notice the warmth, love, and joy she exuded when we talked about their accomplishments. Iva told me about their obstacles and aspirations so vividly, that I felt like I was in Koprivshtitsa, sitting in her classroom. And this is what I saw…

Back then Atanas was in 7th grade and Ganka was in 6th grade. Just like any other middle school student in Bulgaria, Atanas and Ganka also “had to” study English as a second language. Up until that point they were not very motivated to do so. Iva’s new teaching job, however, changed their attitude and proved to be very impactful. Gani and Nasko remembered their first classes with Ms. Pashova very clearly. She won them over with her energy and enthusiasm in the classroom. Her teaching strategies included gamification, project-based learning, poster making, presentations, movie days, individualized approach, a summer academy, and so on.

“Imagine a small school in a small town where nothing ever happens. And then suddenly you get two new teachers and they’re both kind of crazy. They have these new ideas and they also have the energy to get you excited about working on them. She [Ivelina] had to gain our trust, because she wanted us to work pretty hard, which was new for us. They were able to make their classes interesting and fun. They had a more unconventional way of teaching. And they did get us excited about learning – we started participating in competitions, events, seminars, etc.,” said Atanas.

Back in 2011 Ivelina Pashova and Maria Sendova [currently the vice principal of the private kindergarten at the educational complex “Bulgarsko Shkolo”] joined Teach For Bulgaria’s brand new program and started teaching at Secondary School “Lyuben Karavelov” in Koprivshtitsa.

You can also work with motivated teachers like Ivelina and Maria.

Submit the vacant positions at your school here.

Koprivshtitsa is a small town with beautiful scenery and living history. Young people can take advantage of certain opportunities for personal development. There is a brass band, the National Association “Tradition” has a branch there, the Bulgarian Red Cross also has an office in Koprivshtitsa, there are also different types of extracurricular activities that children can participate in, but for some of them these options are not enough. Iva and Maria noticed that and decided to start a few projects with their students. One of them was the Summer Academy where Nasko was a team leader and was responsible for the development of a group of his classmates.

“Koprivshtitsa was too small for me and I knew I wanted to eventually leave. I wanted to live abroad, see what the world was like, and test myself!” shared Gana.

Gana and Nasko volunteered at the Red Cross because they saw it as an interesting adventure with a very high added value. They led lectures together and organized training sessions at school, visited seminars, organized fundraisers, and exchanged ideas and experience with other young people. Volunteering, however, only made them hungrier for bigger dreams and aspirations for the future. Gani and Nasko discussed their hopes and dreams with Iva. Nasko had always dreamed of studying in the USA, but once he shared this with Iva, everything changed.

“I took his words very seriously and started treating him like someone who was going to Harvard,” said Iva.

They researched a lot of opportunities about studying in the US and set up individualized support programs, additional English classes, mock interviews, and requirement overviews. One of the opportunities they came across was a scholarship for the United World Colleges (UWC) – a global movement that makes education a force to unite people, nations and cultures for peace and a sustainable future. The application process consisted of three steps – a test, an essay, and an interview. When Nasko filled out his application, he had no idea that only a few months later he and Ivelina would be at the airport in Sofia, waiting for an international flight which would take him to his dream – a college in the Montezuma Castle in New Mexico.

Gani also followed her heart and Nasko’s example. When she found out about UWC, she realized that their mission for academic growth is focused on personal development and cultural exchange – learning about other cultures, traditions, and people. This coincided with her view of academic growth.

“So the following school year, in September, Gani came up to me in my vice principal’s office and said, “I want to apply for UWC this year, can you help me prepare?”… and we sat down together and did it!” said Ivelina.

Gani’s preparation was similar to Nasko’s – action plans, additional English classes, essay writing, mock interviews, and application forms. For Iva this was time for concentration, excitement, and faith that everything would work out, but her students admit that they weren’t sure they would make it. When it was time to apply for UWC they both had already been rejected by another international program. They were also not very confident in their English language skills. So while they were preparing for UWC, Ms. Pashova kept telling them, “You deserve this!”

“Iva wouldn’t let me give up, she made me focus on what I wanted and got me to keep fighting for it, even though I had already received one rejection letter,” said Atanas.

“I wouldn’t be here now, if Ms. Pashova hadn’t worked with me! While I was preparing, I knew I had someone who would sit down with me and explain everything. She never agreed to fill out my application forms for me, but spent hours explaining how it’s done and helping me develop my English skills. She found books for me, we had additional language classes two times a week… When I got to Italy, I didn’t want to stop, because I knew that there was someone who believed in me!” shared Gana.

As the young doctor-to-be, Atanas Pavlov, put it, “problems will always occur, when you decide to follow your dreams, and if you don’t have the right person by your side, this could be a big obstacle”. Even though they studied at different colleges – Nasko was in Montezuma, USA, and Ganka was in Duino, Italy, they were both educated in the same educational system – International Baccalaureate (IB). IB is a very challenging system. It focuses on six core subjects and encourages students to practice different sports, do art, and get involved in community service activities. This enables students to gain academic knowledge and develop a variety of skills such as teamwork, critical thinking, adaptability, reading, communication, etc. What is more, students get to work on their skills in a completely different country, where everyone speaks a different language, and they are immersed in a multicultural environment with peers from over 80 different countries. Gana and Nasko described their experience as an adventure which they completed successfully, against all odds!

Looking back, they both feel gratitude towards their families – for their support, the tears of joy, the new friendships at the opposite side of the world which are still strong today. Gana and Nasko’s journey is not typical for the children of Koprivshtitsa. This isn’t how life goes for those who don’t have the support of their teachers and their parents.

Atanas is currently in his 5th year at the Medical University in Plovdiv. He would like to specialize either in neurology, or in neurosurgery. He also aspires to become an assistant professor at the university, because he wants to inspire his fellow students like Ms. Pashova inspired him.

“At the end of 12th grade Nasko told me, “I will come back and I will go to medical school in Bulgaria, because I want to practice medicine in Bulgaria!” Ivelina shared proudly.

Only a few months ago Gana started her master’s degree in global development at the University of Utrecht in the Netherlands. Her favorite teacher from the school in Koprivshtitsa also played a role, because Ganka decided to write her bachelor thesis on the connection between the innovative education which Teach For Bulgaria offers and its effects on the learning environment for Roma students in Bulgaria. At that time Ivelina was already leading Teach For Bulgaria’s new program – Model Schools.

“The most important thing that Teach For Bulgaria provides students with is someone who cares about what you do! Someone who sacrifices their free time, in order to help you learn a language. In my case this was English, but for some children it’s Bulgarian. Someone who is ready to help you, because they know that you are not dumb, you just have a problem. Someone who sits down with you and helps you deal with this problem. This opens a lot of opportunities for you!” Gana wrote in her thesis. Today, the girl from Koprivshtitsa wants to travel the world and work for the development of Eastern Europe and Bulgaria.

I open my eyes at the end of this story and I go back home. I collect Iva, Gani, and Nasko’s memories very carefully because I want to take them with me. They told me about their dreams and what it took to make them come true, about the difficulties along the way and how they overcame them. A story about two brave children and a teacher who never stopped believing in them. Ever! Ms. Pashova’s final words still ring in my ears,

“These are two wonderful stories about Nasko and Gani… but it’s very important for every child to have such a supportive environment!”

I see how the three of them think alike and I find it magical, don’t you?

Make a donation to Teach For Bulgaria!

This will allow us to train and support more teachers and schools in Bulgaria!

UniCredit Bulbank Donated Over 13,000 BGN to Teach For Bulgaria on May 24