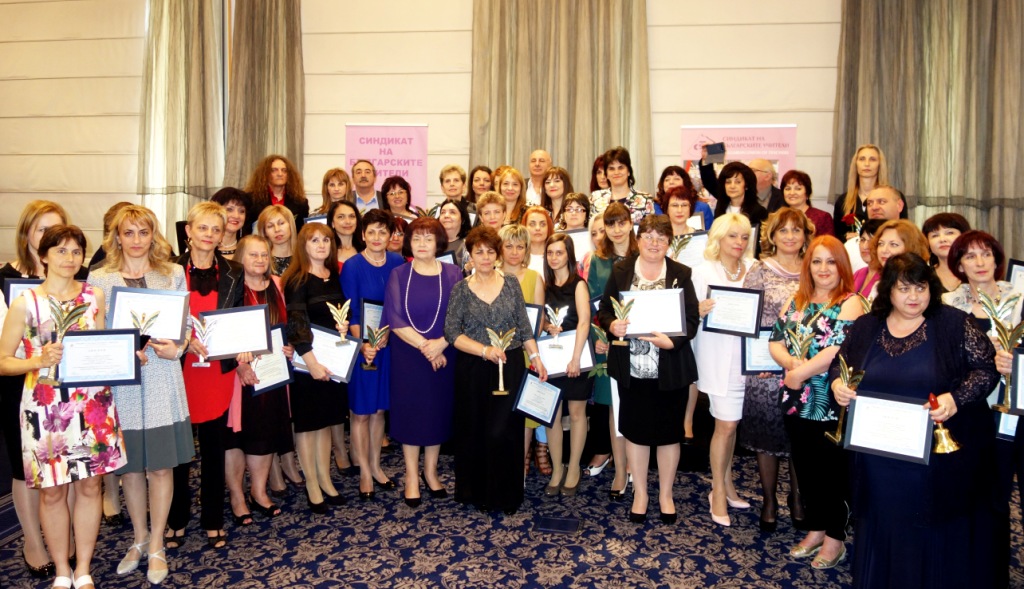 Ten teachers and participants in Teach For Bulgaria’s program from different regions of the country received formal recognition for their work on May 24 – Bulgarian Education and Culture and Slavonic Literature Day.

Primary teachers Daniela Doneva from Primary School “Pencho Slaveykov” and Stoyanka Yordanova from Primary School “Geo Milev” received the prestigious national award “Neofit Rilski”, which is given for professionalism and contribution to Bulgarian education by the Ministry of Education and Science. The two teachers were awarded by the Head of the Regional Management of Education for Plovdiv, Ivanka Kirkova. Just a week ago Stoyanka and Daniela, who are in their second year of the program, were given special awards by the chairperson of the Bulgarian Union of Teachers in the Young Teacher Category and as part of the annual “Teacher of the Year” competition organized by the union.

In the region of Razgrad, Galya Georgieva, who is an after school teacher at Primary School “St. Cyril and St. Methodius” in the village of Yesenovets, was awarded “Teacher of the Year” for 2018 by the Mayor of Razgrad, Dr. Valentin Vasilev. Galya is also finishing her second year in the program and was awarded because of her contribution to education in Bulgaria and more specifically – her efforts to restore the school library, to collect new books for it by carrying out a wide donation campaign, and her thesis on the topic of “Language and Speech Development of Bilingual Children in a Mixed Age Group of 8-9 Year-Olds”.

Evgeniy Lazarov, first-year biology teacher at Secondary School “Hristo Botev” in the town of Kubrat, received an honorary certificate by the Regional Management of Education in Razgrad for training a student who excelled at the regional Astronomy Olympiad.

Another four reasons to be proud

Four Teach For Bulgaria participants in the Northwestern regions of Vratsa and Montana received awards as well – Aleksandar Simov, P.E. teacher at Professional High School for Agriculture located in the village of Kovachitsa, Lom Municipality, Boyan Katsarov (English teacher), Rumen Bozhilov, and Diana Bankova (primary teachers) at Secondary School “Hristo Botev in the town of Kozloduy. They are all first-year participants in Teach For Bulgaria’s program.

Aleksandar was awarded by the Mayor of Lom, Penka Penkova, for his contribution to education in 2017/2018 in Lom Municipality.

Rumen Bozhilov, Boyan Katsarov, and Diana Bankova are among the awarded young teachers in Kozloduy Municipality. Boyan also received a special award for his teacher-student teamwork and for motivating his students to participate in English language competitions.

For the second year in a row Teach For Bulgaria participants who teach in Kozloduy Municipality receive formal recognition for their work. Yanko Morunov and Nevyana Teodosieva were awarded last year.

Oreshene and Pirdop honored too

The mathematics teacher at Primary School “Vasil Levski” in the village of Oreshene, Svetlana Nikolova, received a certificate for her professionalism in working with high school students by the Regional Management of Education for Lovech. Svetlana was awarded for her hard work at the school for the past two years, her accomplishments with “The Oreshene Mathmagicians”, and for organizing and participating in innovative math competitions in the region and across the country.

The English teacher at Professional High School for Tourism and Catering “N. Dimov”, Gabriela Yordanova, was awarded “Teacher of the Year” for 2018 by Pirdop Municipality. She works in the Srednogorie region, one of the first regions where Teach For Bulgaria participants started teaching. Gabriela was awarded by the Mayor of Pirdop – Angel Gerov.

Many principles and teachers who work at Teach For Bulgaria partner schools, as well as supporters of the organization were awarded on May 24. We would like to congratulate them for their dedication and strong motivation to keep working for the success of every child!

Best practice: The team building event “On the lawn” helps bring the school and the local community in the village of Brestnitsa together

Научете първи за новия прием
We use cookies to ensure that we give you the best experience on our website. If you continue to use this site we will assume that you are happy with it.Ok