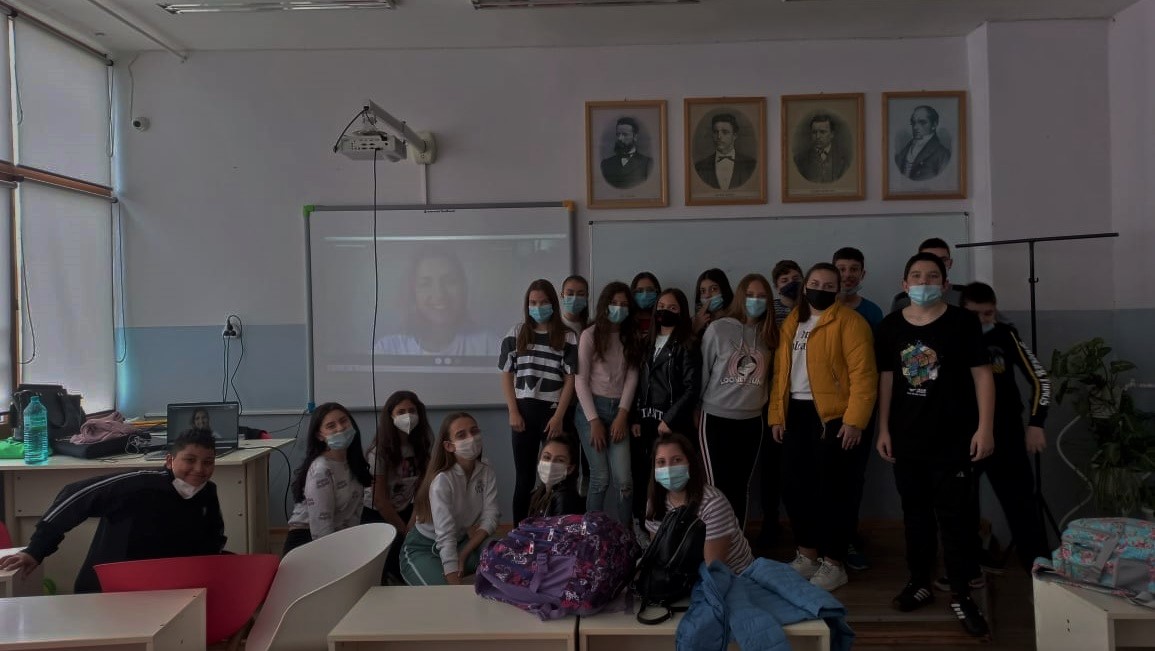 At the end of the school year all 7th-graders in Bulgaria will have a few crucial standardized tests. That’s why it is no surprise that the students at Secondary School “Hristo Botev” in the town of Karnobat are determined to excel at their final exams. However, their teacher Monika Teneva, who is also a first-year participants in Teach For Bulgaria’s program “A New Way to Teaching”, has set even bigger goals for her students. She wants to help them gain self-awareness and agency before they start high school in the fall.

Monika has been working on these two skills with her students throughout the whole school year by focusing on specific content or individual and group discussions. When Teach For Bulgaria offered all participants to invite different guest speakers in their classrooms and provided all necessary logistical support, Monika decided that this would be a wonderful opportunity for her students.

“My personal goal for this visit was to motivate the students to work hard. Even though they probably hear the same message from their parents and their teachers every day, it hits home when you hear it from a celebrity,” shares Monika.

The guest that she picked after some consultations with Teach For Bulgaria was actress Valentina Karoleva who played the main character in the Bulgarian film “A Dose of Happiness”. Valentina is also one of the ambassadors for Teach For Bulgaria sports fundraiser “Challenge for a Cause”.

What is “Challenge for a Cause”?

Monika was convinced that Valya’s personal story combined with her students’ fascination with the film industry would turn this visit into a memorable experience for them and would serve as a much needed motivation for the upcoming standardized tests.

Valya was also very enthusiastic about meeting the students from Karnobat: “It was a pleasure for me to take part in this initiative because I had to take over my mother’s foundation “On the Other Side”. Our mission is to educate young people about serious issues, to show them that it’s OK to talk about our problems openly, and to provide useful information. I think such meetings are crucial because you never know what you can learn from someone and how that can impact your whole life.”

The meeting was set for April 15, but preparations began a few weeks earlier.

In order to learn more about Valentina’s story, the students had to watch her autobiographical film “A Dose of Happiness” without knowing exactly who would be visiting them.

“I kept this a secret and only told them who would be coming two days before the visit. I wanted to keep them excited. We talked about the film and their impressions of it. They had to answer the following questions:

1. What was the first thought that crossed your mind after you watched the film?

2. What is your main takeaway?

3. What would you ask Valentina?,” the teacher shared.

While her students were getting ready for the visit, Monika and Valentina discussed the details.

On April 15 all 20 students were at school, the projector was on, and Valya was ready to have a video conference call with them from London. The meeting went on for more than an hour and was very emotional for everyone involved.

“This was one of the most meaningful meetings for my students. They had all sorts of questions for Valya Karoleva ranging from how to shoot a movie to how she found out acting was her dream job. The students were very focused during the video conference call, they listened very carefully, asked questions, and showed a lot of excitement. I think they will remember this day forever,” Monika commented.

The teacher believes that the most valuable aspect of this experience was Valentina’s personal story and the message she had for the students. Her words reminded them that they have a voice that deserves to be heard and that they only need one person – a friend, a mother, a grandmother, or a teacher – just one person they can trust. Valentina shared stories from her childhood and school struggles which motivated Monika’s students to work hard and pursue their dreams.

“Their eyes were sparkling after the meeting, they were smiling from ear to ear, and they were also deep in thought. Their first impressions of Valya were that she is a positive person, very beautiful, and open-minded. I was a bit worried that they’d be too excited to study after the meeting, but they surprised me again. They were very focused on their tasks,” shared Monika.

According to Valentina, the most valuable aspect of the video call was “the children’s curious gaze. It gave me a lot of hope that such meetings are worth it”.

Valya’s meeting with the 7th-graders continued to be the main topic of conversation for days after that. Monika said that they even dedicated their Friday reflections to it. She believes that the meeting was motivational and helped her students prioritize their long-term goals better.

“I’m sure this was the most appropriate role model for my students – a positive young person who is not afraid to pursue her dreams and who has a strong message to get across,” Monika concluded.

Challenge yourself for a cause on May 30 and support our effort to help more teachers and schools across the country!

Organize a similar experience for your employees and visit classrooms across Bulgaria! Reach out to us at role_models@zaednovchas.bg.