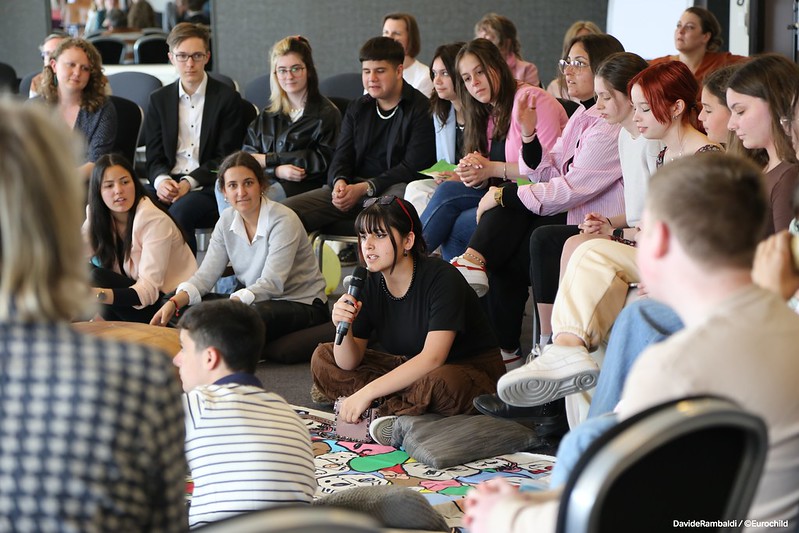 Georgi Stoev graduated from university with a degree in architecture, but decided to change careers and become a teacher. This was possible with Teach For Bulgaria’s program A New Way to Teaching. Mr. Stoev started working as a mathematics teacher in Secondary School “Lyuben Karavelov” in Plovdiv in 2017 and remained there even after the two-year program was completed.

And while Georgi was preparing for his first year as a teacher with a series of training sessions and a university qualification program, Aleksandra was preparing for the tough transition between primary and middle school. The two of them met at the beginning of the 2017/2018 school year in one of the classrooms at Secondary School “Lyuben Karavelov” – a new beginning and a new school both for the teacher and for the student.

Here’s what they shared about their first impressions from one another after nearly five years of working together:

“For the first time I met a teacher whose thoughts were as chaotic as mine. I perceived the things he said more easily, there was always something happening in front of the white board, so my focus was always on him. I was not very active in class and the fact that he always urged me to speak up and participate definitely helped.”

“Alex was one of the students who were driving the whole class forward. I could tell that she had studied very hard in primary school. I tried to teach my students to collaborate and work in groups in 5th and 6th grade. I was not very successful at first, but Alex was trying to motivate her classmates to work together. She is one of those students who care about the world around them, who are not afraid of the differences between people and have empathy.”

Georgi strived to provide his students with a variety of opportunities for personal development – extracurricular activities, access to different competitions, etc.

He started an architecture club and Alex decided to join. She was very interested in architecture at the time and found the club fascinating. The young architects and their teacher spent a lot of time in the old town of Plovdiv where they took some measurements from Chalakova House and other architectural monuments and created blueprints.

The first bigger extracurricular project for Alex was her participation in a leadership program organized by Teach For Bulgaria alumni called The Adventure: It’s Up to Me. Alex participated in the program as part of a team led by Mr. Stoev. Her team chose to work on a mission focused on education. The whole experience – choosing a mission, setting goals, working as a team, tracking progress, creating a final product and presenting it at a national student conference – was very inspirational for Alex. She shared that this was the catalyst which helped her decide what she wanted to do and guided her in the right direction.

The right direction led Alex to her next challenge. She joined the National Network for Children’s platform for child participation – Megaphone. Megaphone is a two-year program which gives students the opportunity to participate in various initiatives and projects by the National Network for Children. Alex is about to finish the program this year, but she will continue to be very active in the Megaphone community. Her next project is to organize the September meeting for the new participants and she already has a lot of ideas.

One of Megaphone’s biggest events is the annual conference Voice It which has a different topic every year. The conference gathers many guest speakers – professionals and experts in the respective field – and the idea is for young people to have an opportunity to voice their perspectives. Alex was the host of last year’s conference in November of 2021 when the event focused on how to use the internet safely.

This year Alex was chosen to become the Bulgarian ambassador in Eurochild Children’s Council with a two-year mandate until 2024. When asked how she accomplished this, she commented:

“Someone writes to you and tells you that you have what it takes, so why not apply. I filled out the application form with no expectations at all and when I found out that I was approved, I was in shock. I tried and I did it. Perhaps as a result of all the other projects that I had done before that. The application form focused on argumentative essays and this is where I can excel because I have plenty of opinions which I don’t intend to keep to myself.”

The “someone” who reached out to Alex with this opportunity was Georgi Stoev. He is also going to be her mentor during her mandate as an ambassador.

“Alex already had a very impressive resume and I knew that she had the potential to do this. So I insisted that she should try. Sometimes you know something that the student hasn’t completely realized yet, but you just have to believe in their abilities.”

At the end of April, Georgi and Alex traveled to Belgium for the founding assembly of the council in Brussels where they met with the other selected ambassadors from other EU member states as well as the UK, Ukraine, and Serbia. Georgi and Alex were accompanied by the former Bulgarian ambassador, Milena, and her mentor – Emanuil Georgiev from the Bulgarian Safer Internet Center.

The purpose of the founding assembly was to help all children bond and get to know each other. They had the opportunity to participate in a variety of activities and workshops.

“We learned about each other’s countries, Eurochild, the Council and the General Assembly, the structure of the EU institutions. The goal was to exchange ideas and to get to know each other.”

Every ambassador is encouraged to develop their own national projects during the two-year mandate. Alex was very impressed by the national project of the former ambassador of Finland who started a national youth parliament. She is considering trying something similar, but on a regional level for Plovdiv.

The Balance between Formal and Informal Education

Alex values her participation in all extracurricular activities, projects, and initiatives, but shares that she is trying to find a balance between that and her regular classes at school. This is especially important at the moment because she is going to have external evaluation exams at the end of 10th grade and the results are going to have serious implications for the future of her formal education.

Still, she dedicates a lot of her free time to her projects led by the belief that they help her grow as a person and also because she’s not convinced she’ll have the opportunity to keep doing that once she goes to university:

“In order to learn, you have to grow as a person. We can’t memorize facts without being able to express ourselves on a basic level. You can’t function in isolation. You have to work with others, communicate, compromise, and be part of a team. These skills are more important than facts you can easily google. There is no right or wrong in extracurricular activities. And in class, there are still some teachers who get angry when we ask questions, which is ridiculous. We should be encouraged to ask questions, but when there are rigid rules about right and wrong we’re scared – the limitations are very tangible. Fear makes you freeze. So I’m not allowed to have an opinion until I’m 18 and then I have to be an active citizen. Young people don’t vote because they can’t even speak up about what they want to eat until they’re 18.”

Georgi Stoev also shared his general observations from his extracurricular work with the students:

“Extracurricular activities focus on child participation – children are able to voice their opinions, explore, investigate, etc. This is harder to accomplish in class and it’s one of the main differences between formal and informal education. It’s much easier to work with some students outside of class and to build a relationship based on mutual trust and respect outside of the classroom.”