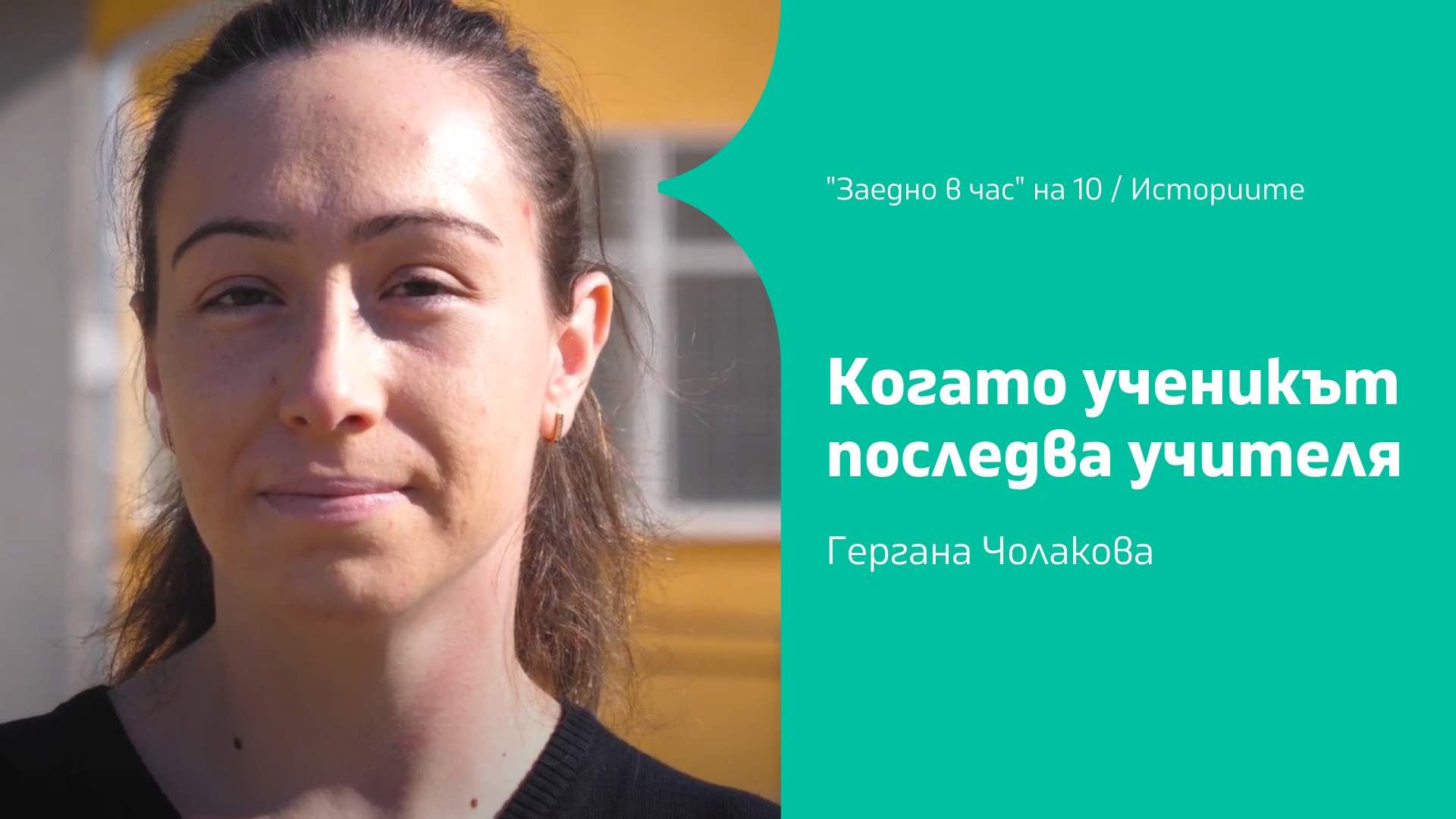 September of 2011. A typical start of the school year for Gergana Cholakova and her classmates at the Vocational High School of Tourism in the town of Samokov. Some classes, however, seem to have a slightly different atmosphere – not only because they are taught by the two new teachers, but also because the new teachers are significantly younger than the rest of their colleagues at the high school.

The new teachers are Radina Marincheva, who teaches economics, entrepreneurship, and accounting, and Deyan Petrov, who teaches philosophy. While trying to get to know their students, Radina and Deyan shared a lot about themselves. This was how Geri and her classmates found out that the two teachers were placed in Samokov as part of the first class of participants in a program which recruits professionals with diverse backgrounds to become teachers in an effort to provide every child in Bulgaria with access to quality education.

Back then Geri was in 10th grade and this was the first time she’d heard about Teach For Bulgaria. This introduction led to a long adventure which would later make Geri the first student of Teach For Bulgaria teachers to become a teacher and to participate in the program. She is currently part of the teacher support team at the organization.

Setting a good example in and out of the classroom

According to Geri, all teachers at the Vocational High School of Tourism in Samokov were devoted to their profession, but Radina and Deyan raised the bar even higher.

If you asked her to summarize her first impressions of Radina and Deyan, Geri would reply in just one word: rigor.

“I remember getting 80% at one of the accounting tests which would be a B, so I asked her (Radina), “Why couldn’t I get an A?” and she said, “I think you could do much better than an A,” Geri shares.

At first, Geri and her classmates were surprised by Radina’s high expectations. As time went by, however, they realized that she was this demanding because she was trying to build their self-efficacy and begin to unfold their full potential.

“What Radina taught me in 10th grade helped me later when I was in university. This is very indicative of the kind of impact she had,” says Geri who majored in tourism at the South-West University in Blagoevgrad.

Geri remembers Deyan as the life of the party in a purely intellectual way, and as someone who did their best to engage his students in meaningful extracurricular activities.

Deyan recommended a variety of books to Geri and recruited her to participate in the newly-formed student parliament which he initiated and which still operates on the territory of the entire municipality. Geri turned to him for advice when she had the idea to start a women’s soccer team in Samokov. Unfortunately, they weren’t able to finish this project. The local soccer school “Dimcho Marinov” managed to start a women’s soccer team later on, but it was only active for a couple of years.

Following in the footsteps of her teachers

Geri did a semester in Portugal as an Erasmus + exchange student in year 4 of her university studies. This allowed her to experience a completely different education model. The focus was on practical activities which provoked the students to build upon their skills and knowledge by working on a variety of different tasks.

This far more engaging approach appealed to Geri and she decided that she wanted to become a teacher after graduating in order to help her students grow into thinking, curious, and responsible citizens. She also realized that this would allow her to pay it forward by following in the footsteps of her inspiring teachers.

The decision to become a teacher by joining Teach For Bulgaria’s program “A New Way to Teaching” seemed only natural to Geri. She successfully went through the rigorous selection process and the preliminary summer training and joined the teaching staff at 90th Secondary School “General José de San Martín” in September of 2018. Her school is one of Teach For Bulgaria’s earliest partners. She taught geography and economics to middle and high school students from 2018 to 2020.

“I was very excited when I found out that Geri was going to be a teacher,” shares Radina who currently teaches entrepreneurship, financial literacy, and English at Municipal Children’s Center “Sredets” and runs a family agriculture business. “She is a very inquisitive and critically thinking person. I didn’t think that any of our students would ever become a teacher. This is a huge success for me and for Deyan. If we’ve managed to motivate a student to follow in our footsteps and become a teacher, we must have done something right.”

Geri’s decision warms Deyan’s heart. He finished Teach For Bulgaria’s program in 2013 and has been working on different projects with the Parents Association, National Network for Children, and Alma Mater TV. He is currently also developing his own school for rhythm and percussion instruments.

“It is rare to meet people who are interested in social studies or philosophy at a vocational school for catering and tourism,” says Deyan. “Gergana was the only person I saw reading books during recess. She lived with the idea that she was a very different person from what her community in Samokov expected her to be. This weighed heavily on her. Perhaps what she saw in me and Radina was that it was possible for people who don’t exactly fit in to be happy with their lives. I think she saw teaching as a chance to be herself without having to worry about what society expects of her.”

Deyan and Radina had two completely different approaches when it came to pedagogical practices and working with students. However, they both agree that they’ve done their best to set a good example for their students because Geri isn’t the only one who currently works in education.

She, herself, is adamant that Teach For Bulgaria’s program “A New Way to Teaching” has given her valuable experience, applicable in many ways even outside of the classroom.

The preliminary training before the start of her first year as a teacher and the professional support provided by Teach For Bulgaria along the way have given her the much needed boost in self-efficacy in the classroom. This was especially useful during the unexpected transition from traditional to distance learning in March of 2020. Back then Geri and several of her colleagues were asked to learn how to work with Google Classroom and train the rest of the teachers at 90th Secondary School “General José de San Martín”. They managed to do all that over one weekend.

Guided by the sentiment that they were all in this together, teachers, students, and parents adapted to the online classes relatively easily. Geri saw this as an opportunity to work on more practical assignments and projects with her students such as having Asya Stancheva from the Step for Bulgaria Foundation as a guest speaker who led a workshop on how to write a CV for Geri’s students.

“The program fosters the development of many skills – organizational, teamwork, analytical and critical thinking, the capacity to adapt, problem solving such as how to organize an online school in two days because of the pandemic. The program gives you plenty of space to think about your own ideas, how you can build upon them, and how to actually implement them in your work,” says Geri who has also completed a teaching certification course at Veliko Tarnovo University during the program, which allows her to teach geography and economics.

Geri completed Teach For Bulgaria’s program at the beginning of July of 2020. She still has a great relationship with her former colleagues at 90th Secondary School “General José de San Martín” because she currently supports three of the new participants in the program who have started teaching there. Geri is in a new role – Teacher Training and Support Coordinator at Teach For Bulgaria.

“Teach For Bulgaria is a cause – to think about Bulgaria’s future by helping all students so that no one is left behind or dropping out,” Geri explains. “The sense of community makes you feel valuable and useful. If I struggle with something I just write to the community, “Hey, I have this problem, what should I do?” and I know many people will reach out to help me which I find exceptionally valuable.”

Besides the fact that she shares the values of Teach For Bulgaria’s community, Geri joins the team because she believes that her work will have a positive impact on many teachers and students across the country.

“There are many challenges along the way, but working with students makes me feel like I’m doing something meaningful with your life, so I would love to teach again in the future.”

Follow in Gergana’s footsteps and apply for Teach For Bulgaria’s program here.

Support our work and help us train motivated people like Gergana who want to become teachers by making a donation.

What Have We Learned in 10 Years?

My Dreams about Bulgarian Education