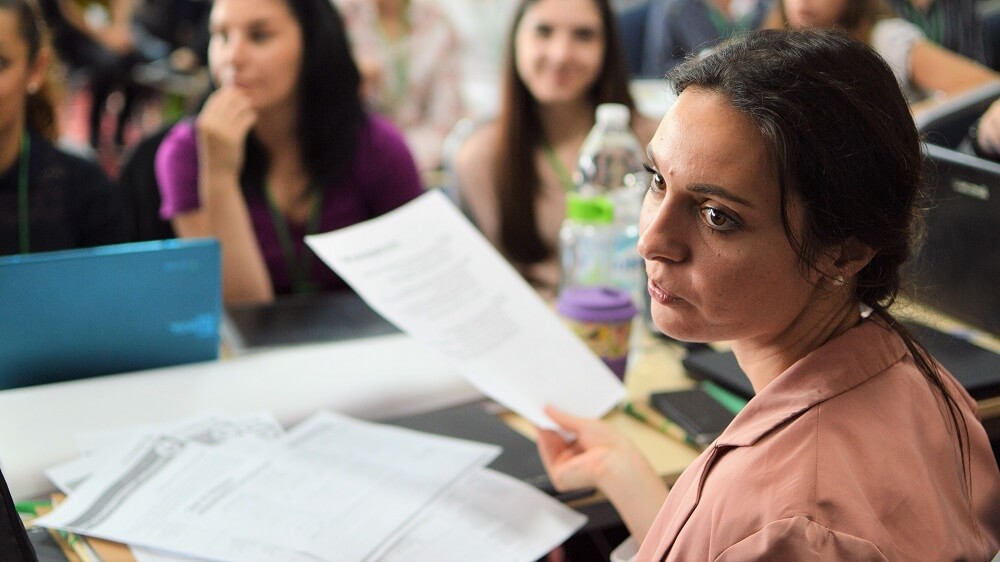 If you’re also looking for a rewarding career and you’re ready to accept the challenge of becoming a teacher, apply here by November 15.

Every workday morning at 9:20 Yoanna is in a hurry to get to the bus station in Kazanlak in order to catch the bus to the village of Razhena. She usually makes it to school by 10-ish to say good morning to her colleagues. Then she makes final adjustments to her plan for the day – she checks what her students have to do for homework, prints out worksheets, goes through the attendance sheet and school records… At around 1 p.m. she has lunch and plays games with her students at a place they have chosen together. They currently play mostly basketball to prepare for an upcoming competition. Yoana makes sure to incorporate a few trust-building games which her students play with their eyes shut. At the end they all gather to talk about winning, losing, and what it means to be successful.

After this physical exercise session Yoanna and her students go back to the classroom. They go over the classroom rules and the goal of the lesson Yoanna has planned for them. It is important for the young teacher that her students know exactly what they will be doing that day and why it matters. If they seem tired, she includes more energizers throughout the day and she makes sure to plan activities which allow them to communicate and collaborate. They take a short break and move on to doing their homework for the next day. Then it’s time to read! Yoanna usually brings children’s books for her students to choose from, but they sometimes read from their textbooks as well. The after-school activities end with another session of games in the schoolyard. Then Yoanna and her students, who live in Kazanlak, catch the bus at 4:30 p.m. The teacher enjoys the time she spends with her students on the bus because it gives her the opportunity to get to know them better, learn more about their interests, and if someone has misbehaved throughout the day, she can talk to them and find out what has been bothering them. Back home Yoanna starts planning her lessons for the following day.

This is what a day in the life of Yoanna Dimitrova looks like. She works as an after school program teacher for middle school students at Primary School “St. Cyril and St. Methodius” in the mountain village of Razhena located in the region of Stara Zagora. This is also her second year as a participant in Teach For Bulgaria’s leadership and professional development program.

In the Village Where Everybody Knows Your Name

“Teaching in a small village such as Razhena is actually quite nice – the region is beautiful, so I can have my classes in the school yard or take my students hiking; the village is peaceful and quiet, and I normally meet everyone on my way to work in the morning,” says the 29-year-old Yoanna.

Yoanna also shares that people know each other in Razhena, village life can be quite boring, there aren’t many cultural or other types of group activities, so everyone gets excited whenever there is a school event or initiative.

The fact that the village is so small helps Yoanna do her job better. Some of her students live in Razhena and some of them live in Kazanlak – the nearby town, so it isn’t a problem for her to do home visits whenever there is something important to discuss. Getting the parents involved in their children’s education is a crucial aspect of Yoanna’s job. Kalinka Bogdanova, Gergana Bachevska-Peneva, and Yoanna, all three of whom teach at the same school and are part of Teach For Bulgaria’s program, organized a treasure hunt last school year. The goal of the event was to get students, teachers, and parents to work together and build a relationship of trust (you can watch a short video about the event here).

The First Days in Razhena

Yoanna had to jump through a lot of hoops before she was able to organize a treasure hunt. When she started teaching at the primary school in Razhena she realized that her students had a hard time answering questions such as “What do you want to be when you grow up?” or even “What toy would you like to get as a present?”.

She started organizing group reflections every Friday to get her students to share thoughts and experiences. At first nothing happened, but the children felt more and more comfortable with this format and soon began to share their dreams and aspirations.

“I saw these amazing children who needed someone to look up to, someone to support them in their learning, someone who truly believed they were capable to achieve anything,” Yoanna says.

Her students, however, had another problem as well – they were having difficulties with their studies. Bulgarian is not a mother tongue to almost all of them which makes it harder to understand lessons and instruction. This leads to a constantly widening achievement gap in each class. A holistic methodology for teaching Bulgarian as a second language hasn’t been developed yet which makes the job of teachers working with bilingual and multilingual students even harder. (Find out more about the problem and its potential solutions here.)

Yoanna was able to see some positive results from her work during her first year at school because she was very persistent, had a growth mindset, never stopped looking for solutions, and had the support of her colleagues, parents, and her Teacher Support Coordinator from Teach For Bulgaria.

Her students attended her classes regularly, did their best to keep the classroom rules, weren’t afraid to ask questions, and improved their grades.

Yoanna, however, wanted more for them. She wanted them to develop 21st century skills: how to work as a team, how to extract information from different sources, how to form an opinion and defend it with arguments, how to speak in front of their peers or in front of a wider audience, and how to give and receive constructive feedback. “I want them to explore their own interests, set goals, and have the courage to pursue them; I want to develop their agency,” Yoanna says, “to get them to believe in themselves and their dreams.”

The Journey That Led to Teach For Bulgaria

Yoanna joined Teach For Bulgaria’s program because of two of her closest friends. They had already started their participation and told her how they managed to overcome the daily challenges of the teaching profession. Yoanna visited her friends at school, met their students, observed classes and saw what a difference their hard work made throughout the school year.

“I worked in the service sector in Sofia for a number of years and I liked it, but I felt like I had to make a change in order to grow,” shared Yoanna who majored in history at South-West University in Blagoevgrad.

She also completed a training to become a financial consultant, but chose the opportunity to work for a meaningful cause and to contribute to society by giving back and paying it forward instead. This was how she decided to apply for Teach For Bulgaria’s program. Once she entered the program she saw a teaching vacancy near her hometown of Kazanlak. She chose to go back home to support children’s equal access to quality education in the region. Yoanna wants to be a role model for her students, to teach them well, and give them access to a variety of opportunities for development – just like her own caring teachers did for her back when she was a student. Teachers who can open doors for their students regardless of where children live live or whether they are rich or poor.

What do students whose mother tongue is not Bulgarian need – learn more about this problem and a few potential solutions.