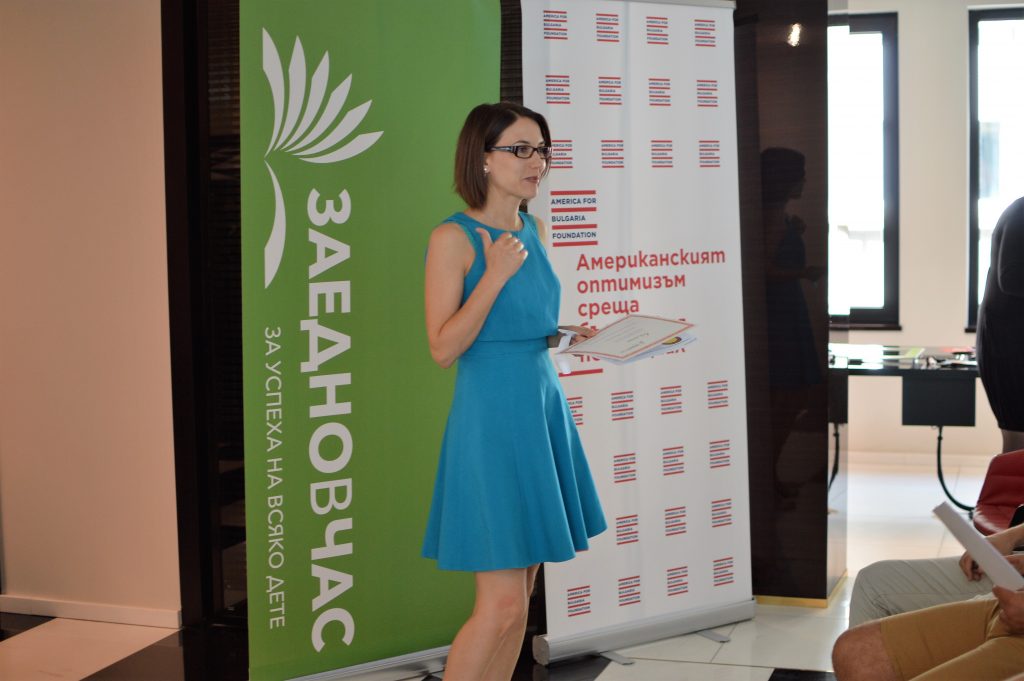 When it comes to innovations in education in Bulgaria, the village of Zheleznitsa probably wouldn’t come to mind, but right there, at the foot of Vitosha Mountain, about 10 kilometers away from Sofia, a young teacher has taken it upon herself to create the very first Montessori classroom in a Bulgarian municipal public school and to teach a mixed age class of primary school students according to the Montessori method.

This is Dilyana Ivanova’s story.

She has been a teacher at the local school in Zheleznitsa for four years now. Her teaching career started back in 2015 when she joined Teach For Bulgaria’s program and completed it successfully in 2017. Dilyana and her colleague Tatyana Siridzhanova are currently laying the foundation of Montessori school education in Bulgaria. This is possible thanks to a combination of factors: the changes in the law of education which allow for innovative methods of teaching in the public classrooms, the support of Savina Ignatova – principal of the school, the parents who wanted their children to be in Dilyana’s classroom even though some of her students don’t even live in the village and travel to Zheleznitsa every single day, and many other teachers, supporters, and volunteers who are part of the Montessori community in Bulgaria.

But what exactly is the Montessori method of education?

Developed by Italian educator Maria Montessori, the method is based on the principle of learning by doing; it relies on teachers’ scientific observations of children and gives students the freedom of choice of activities from a prescribed range of options with no time limits. An important feature of this approach is that it mainly focuses on early childhood development and is therefore most popular among several private – and recently even a few municipal – kindergartens in Bulgaria. We visited Dilyana’s classroom in the village of Zheleznitsa to see how it actually works. 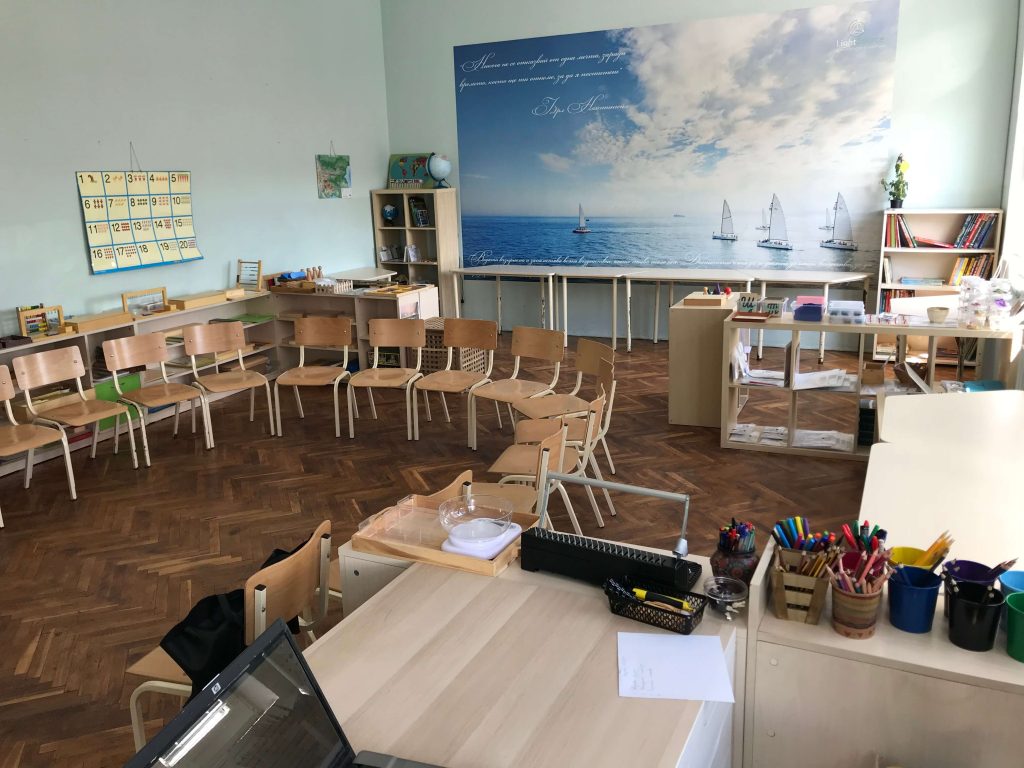 Orderly Chaos in the Classroom

We were surprised at the sight of 15 pairs of shoes left outside the classroom, but we quickly figured out why this was necessary. Dilyana’s students were everywhere – sitting on the floor in groups of three or in pairs, leaning against the wall reading books, at the computer on the teacher’s desk, or working at their own desks… My arrival caused a bit of a stir, but shortly after I introduced myself all students resumed their work without any intervention by Dilyana. Almost all children talked to each other during their group work, but no one was too loud or intrusive.

Their classroom seemed a bit messy and chaotic at first – every student had their books open, papers spread out, or Montessori learning resources in front of them. Two of the students sitting on the floor had small jars full of herbs and were trying to identify the herbs by their smell. Meanwhile, the school bell rang, but everyone just ignored it. At one point one of the children got some food out, started eating at the designated place, and even shared it with some hungry classmates. When I looked closer I realized that there was no mess in the classroom, all students put away whatever they had finished working with. The student who had a little snack cleaned up afterwards.

Overall, I was most impressed by the “organized freedom” in the classroom. All students were free to try out different activities, work with different resources, and eventually move on to something else. They work alone or in groups and the classroom can be described as anything but teacher-centered.

According to Dilyana, this is the philosophy of Montessori. “Freedom of choice, freedom of movement, freedom of picking your partner or the place for your work. They are all free to pick which activity to start with, they are also free to move on to another one whenever they wish,” Dilyana says. Freedom of choice is not the same as anarchy. “Students plan out their day every morning. We also have rules which require them to do language (Bulgarian), math, reading, and science every day,” the teacher shares. This gives them structure and then they can follow their own tempo. “But it is obligatory for them to work on all subjects throughout the day,” Dilyana is adamant. 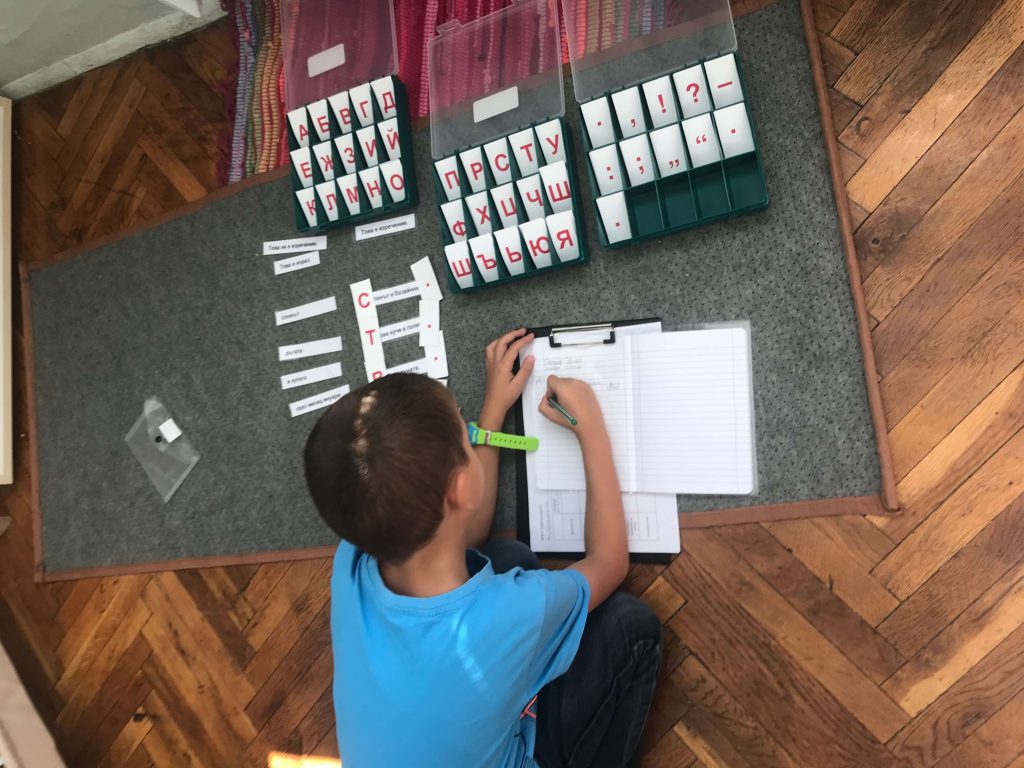 Giving students more freedom in the classroom does not mean that they are not obliged to progress according to the same educational standards as their peers. “We do midterm assessments, start of the school year tests, we follow all requirements of the Ministry of Education and Science,” Dilyana says. The difference, however, is in the approach. “We don’t say ‘OK, we’ll have a test now’, we say ‘let’s see how much progress you’ve made in order to understand what you need to work on’,” the teacher says. Based on the results she makes individual plans for all students, so they can work on their areas for improvement.

“This is the main principle in our classroom – we have an individual approach to every child. We can’t just bunch them together,” adds Diliyana.

Another main principle of Montessori education which we can see in Dilyana’s classroom is the mixed age class. Dilyana works with 15 students from first to fourth grade. “They all work together, older students help younger students and develop patience in the process while their younger peers learn from them. Sometimes a younger student will develop a skill very fast and start teaching an older student,” Dilyana says.

I saw this myself when one of the boys who would be a second grader in a regular classroom used Dilyana’s computer to access an ebook on chemistry and solve chemistry equations for seventh grade. “I saw he was interested in chemistry, he probably takes extra chemistry classes after school and I decided to offer him more chemistry-related activities in class,” the teacher says. Dilyana told me that this boy came to her class after completing first grade at a regular school. He had previously gone to a Montessori kindergarten. A few months after he joined Dilyana’s class his parents told her that his natural curiosity which he had lost in the regular school had come back. They told her that he had stopped asking questions the previous year.

Everyone is a teacher

According to the Montessori method of education, the role of the teacher is not to teach knowledge, but to inspire students to look for all answers on their own, to solve problems, to grow, and last but not least, to help each other. “In theory there is only one teacher in the classroom, but in practice every child can be a teacher and this is what adds the most value. Whenever students have trouble understanding something we encourage them to try harder on their own first, then ask a classmate, and if they still don’t get it, they can come to us,” Dilyana says. The fact that Dilyana’s classroom is not teacher-centered doesn’t mean that she doesn’t have a role, on the contrary – she walks around and helps every student, makes sure they all work on their activities, asks questions, and resolves conflicts (if there are any). Students help each other in the mixed age study groups. 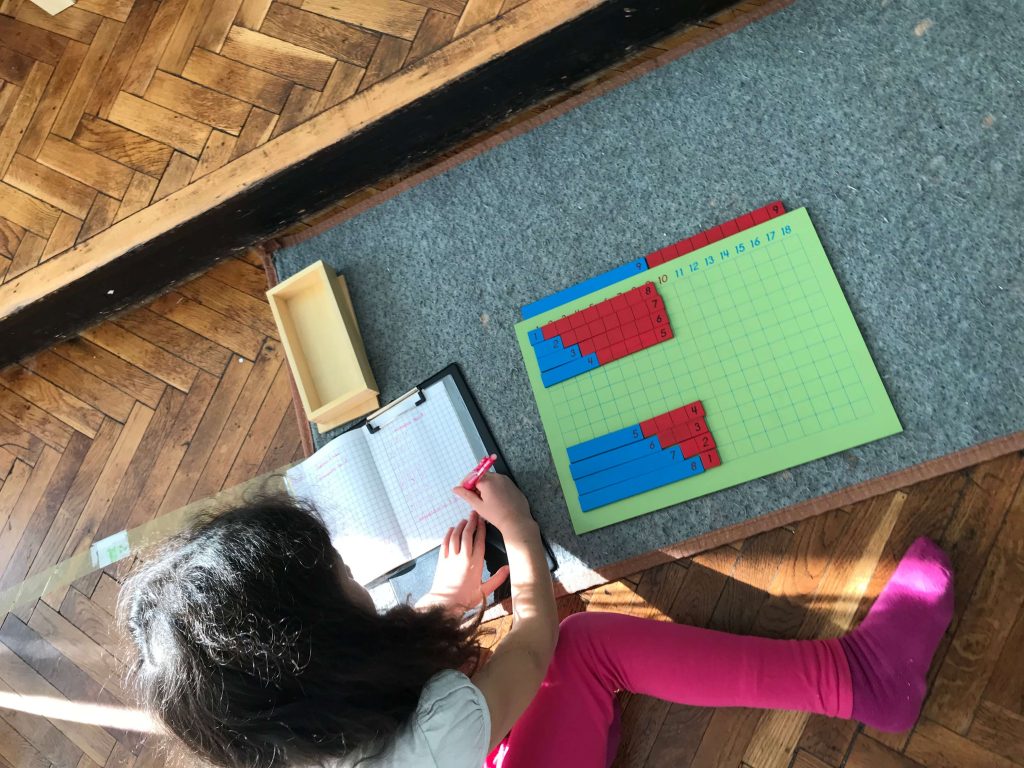 The combination of this individual approach and freedom of choice while adhering to the rules makes for the unique profile of Montessori children.

“They are extremely curious, learning is not something they do under the orders of a teacher, learning comes from their own motivation to discover whatever they need in order to explore even further. Setting their own goals makes them more responsible for their own actions and allows them to work in groups and participate in the process,” Dilyana sums up.

She says that children may not learn absolutely everything required by the curriculum, but the most important thing for them is to be equipped to deal with real life and even learn beyond the curriculum. “For the past two years we’ve pretty much gotten into a nice work rhythm and learned to follow the rules, but we still need to provide additional support for some of the students. We need to help them develop their emotional intelligence so they can understand their own emotions and the emotions of their classmates better. There’s more work to be done,” Dilyana shares.

Dilyana has accomplished a lot in terms of parent engagement and relationship building. Her work at school makes parents trust her, some of them travel from Sofia to Zheleznitsa every day. “I met parents who were looking for an alternative. They feel the need for an individual approach and freedom of choice,” Dilyana says.

The individual approach is not just reserved for the students, but is applied to their parents as well. “We have three personal meetings with every family to talk about their children’s progress, work ethic, they way they interact with their classmates or work in groups, what they need to improve, how the family can support them at home… because we know that education is not limited to whatever happens at school,” Dilyana says. A bonus to make up for the long commute is the fact that there is no homework.

“Children need to spend more time with their parents, this is much more important for any family than extra school work which usually stresses out the whole family,” Dilyana says.

The time she spent with her own son during her maternity leave is the whole reason why Dilyana decided to change her life and career. When Petar was born eight years ago Dilyana started her research in early childhood development. This was how she found out about the Montessori method of education and later started her teaching career by participating in Teach For Bulgaria’s program. “I found like-minded people who support me at Teach For Bulgaria. It was very important for me to find people who share my views, believe that change comes from within, and work hard to improve their communities despite the widespread pessimism,” the teacher shares.

One of her partners and supporters is Desislava Stoeva – the Montessori pioneer in Bulgaria. Desislava is Dilyana’s mentor, but they first met when Dilyana enrolled her son in the first Montessori kindergarten in Bulgaria, Casa Dei Bambini, which was founded by Desislava.

“She was one of the parents I worked with and we quickly realized that we share the same passion,” Desislava shares. She teacher the Montessori method of education at the Pedagogical Faculty of Sofia University and helps Dilyana in various ways – with methodological support, learning materials, finding volunteer teaching assistants.

“A project like this one takes dedication and energy – both physical and mental. But she was ready for this challenge and despite all difficulties, she is doing great,” Desislava says. Dilyana had to go through a specialized course in Canada to become a certified Montessori teacher because this type of training is not available in Bulgaria yet. According to Desislava Stoeva, there is demand here now, so things will soon change. And teachers like Dilyana Ivanova are going to be the leaders of this change.