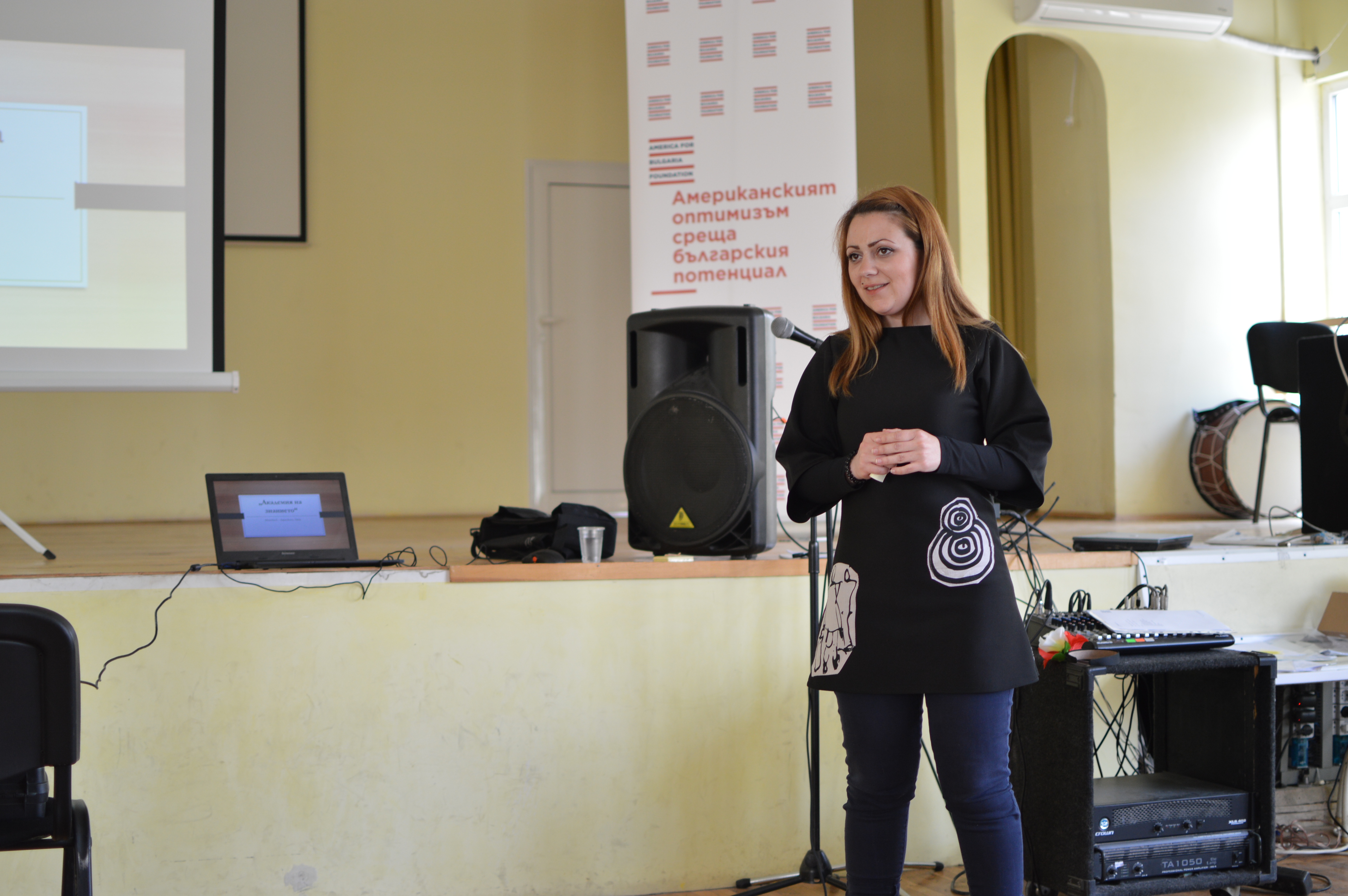 Petya Daneva, founder of “The Academy of Knowledge” in Varna and Teach For Bulgaria alumna, talks about her experience as a teacher and social entrepreneur

If you’re looking for a rewarding profession and you feel ready to take on the challenge of becoming a teacher, apply here by Feb 10.

Teach For Bulgaria is expanding its scope and is going to work with partner schools in 8 new regions in 2020, including Varna.

A scorching hot and lazy Friday afternoon in August. A group of about ten children are laying out a blanket on the tiles of a spacious shady room in the back of the community center located in the neighborhood of Asparuhovo in Varna. They all look tired – they’ve just come back from the beach – but there is one more thing they need to do before they can go home. They all have to reflect on the past week – what they’ve done, experienced, and learned – and write it down in the form of a story.

“Should we write down our adventures, so we have something to look back on this summer,” asks their teacher, Petya Daneva, whom the children simply call Petya.

“We’re feeling a little lazy,” one of the boys admits and his peers start laughing.

Little by little, however, the story starts to take shape. The children take turns to talk about their week. “We told the story of Sly Peter,” someone says. “We danced to Just Dance”, adds another child and suddenly everyone wants to share. “We saw a big blue jellyfish on the beach”. This last prompt seems to stir the memory of a little girl who says, “I have a dead crab in my bag… my mom is going to be upset because it will probably smell bad.”

As soon as they finish writing their story it’s time to start illustrating.

Their recollections will turn into an illustrated book which they will present to their parents.

The Long Journey to Knowledge

This is how summers go by at “The Academy of Knowledge” – Petya Daneva’s after-school program which gives her the creative freedom to develop her own methodology for after-school academic help and extracurricular activities. Petya is a Teach For Bulgaria alumna from the class of 2014-2016. While she was in the program she taught history and geography at the Vocational Professional High School of Tourism and Food Technology “Nikola Dimov” in the town of Pirdop. She founded “The Academy of Knowledge” a short while after she decided to go back to Varna. So far hundreds of children between 6 and 10 years of age from the neighborhood have gone to Petya’s academy. She has made sure to make this service affordable for low-income families as well.

It All Started with Her Own Daughter

“I was looking for a high-quality after-school program for my own daughter and we tried a variety of private schools. I was not satisfied with any of them because I quickly realized that their goal was to exhaust the children during the day, so they could be nice and quiet for their parents at home,” Petya shares.

Back in 2017 Petya changed quite a few jobs. She worked as a vice principal of a private school in Varna and as a project funding expert at a local association, just to name a few. However, she also made time to develop her own methodology for a summer school and she organized free weekend extracurricular activities and academic support.

“My goal was to help primary school students develop their soft skills and I also wanted to test the methodology I was developing,” she adds.

Quality Education for Everyone

Petya jokingly says that in the beginning she felt like a birthday clown. She started practicing with the children of her friends or the ones whose parents she met at playgrounds and cafes in Asparuhovo. Her first classroom was at a local school whose principal let her use it, if she agreed to provide ongoing training for the teachers. Her business model, however, proved to be financially unsustainable. “I went to several social entrepreneurship trainings and everyone told me that my plans were not financially sound. However, I felt like there was nothing I could change, and even though I could clearly see that it wasn’t working, I just had to press on,” Petya says.

She was only able to reach a solution because of the trust she had built with the local community.

“I am able to cover all expenses with the summer school fees. However, in the winter I always get a second job in order to cope financially. Some students pay the full fee, others only pay half a fee or nothing at all. The number of students I don’t charge or charge next to nothing depends on the number of students whose families can afford my service and are willing to sign their children up for it,” Petya shares.

Approximately 20,000 people live in the neighborhood of Asparuhovo. Petya quickly identified her target group – primary school students who need additional support. She managed to convince some of the parents to pay higher fees to cover for children from low-income families. “This model may not be financially sustainable, but it makes sense for the children,” Petya claims and underlines the importance of having diverse groups of children learn together.

“I encourage volunteering and I teach children to help each other because I feel like this element is missing in formal education,” Petya says and adds that getting children with diverse family backgrounds together helps them understand each other better.

From Russian to Robotics

Her academy does not teach only soft skills. Children can take lessons in Russian, robotics, math, reading, and writing. Older students are encouraged to help their younger classmates and conflicts are usually resolved with little to no assistance from the teacher.

“During the school year I try to set up a program for self-organized learning. At the beginning of the school year every student sets their own vision, goals, and tasks,” Petya says. Parents are welcome to come and observe lessons every Friday.

Working with parents is a major focus of her work.

Petya has an individual approach with every family, she provides personalized feedback, and usually at the end of the month she also writes down her suggestions of how children can improve or what they should focus on at home. This is especially important for reduced-fee families. “It takes a lot of persistence. That is why I wrote a contract to hold them accountable and told them that if they didn’t attend my parent trainings, they would have to pay the full fees with penalties,” she says.

Gradually “The Academy of Knowledge” community grew so much that the classrooms became too small. Petya then managed to get access to a small and then a larger hall in the local community center. The spacious hall is cozy and looks more like a room in Villa Villekulla than a classroom – there are tables and chairs, but also all sorts of games, learning resources, a heater, and a large bookcase.

“When I first saw this place it was infested by pigeons, part of the roof was missing, and all the windows were broken. It used to be an arcade room – I thought it was romantic,” Petya laughs and goes on to say, “It’s chaotic, but what I like about it is that, in the winter, children can make their own tea, add as much honey as they want, bring their own mugs and pillows.”

A Tough but Unforgettable Initiation

And while the academy she fought and worked so hard for feels especially cozy and warm in the early August afternoon, her “initiation” into the teaching profession in Pirdop, as part of Teach For Bulgaria’s program, sounds much different.

“My students were in class even when the temperature was below freezing, it was really cold. I stayed with them after school because I wanted them to know that I had a lot of respect for what they were doing and I could see how difficult it was for them, but I also wanted them to see that there was a sense of urgency to learning. And that if they wanted to live and work in better conditions, this was how they could do it,” the teachers remembers.

On her first day of school only about 20 out of 116 students showed up to class.

So she started picking them up for school in person by going to the student dormitory, where most of them lived, every single morning at 4 a.m. “My first task was to go to every room and wake them up – by turning hairdryers on, banging on pots and pans, or by giving them good morning hugs,” the teacher reminisces. Little by little students started respecting her efforts to get them to come to school and stay in class.

Then she had to help them catch up with their studies.

At the end of her first year as a teacher she had 76 out of 116 students resit their final exams because she wanted them to work harder on their studies. “I wasn’t trying to turn them into historians or geographers, I was trying to help them attain basic literacy which they lacked. I wasn’t shocked by their spelling mistakes, because I knew that all students in Bulgaria had the same horrible spelling, I was shocked by the fact that they had low expectations for their lives,” Petya says.

To help them realize they could do much more with their lives, the teacher decided it was best to literally broaden their horizons.

“Their wildest dream was to travel only as far as Sofia. They had never heard of any other professions besides lumberjacks, minors or taxi drivers,” Petya says.  So she organized field trips to the city and gave her students the opportunity to volunteer at the soup kitchen at “St. Elijah” church in the neighborhood of Druzhba 2. “We still had to get up at 4 to catch the 5 o’clock train to Sofia and start cooking on time, but at least we had the chance to visit all the sites – Lions’ Bridge, the National Assembly, Eagles’ Bridge…,” Petya says.

Petya and her students, supported by Teach For Bulgaria, organized a history and geography conference. They invited schools from Sofia to participate as well and all workshops were led by students.

“Everyone was involved in the organization of this conference – throughout the entire school year. While I was teaching and my students were working on their studies, we also planned what types of skills we wanted to include in our workshops. We wanted to teach other students, including those from Sofia. Nobody complained about the weather or how cold it was, they all came to class and stayed after school,” Petya says.

This, however, comes at a high price – hard work and self-sacrifice, but Petya does not regret joining the program. “I became part of a community where I felt like I belonged. Even when my work was criticized, the negative feedback kept me grounded and helped me grow,” Petya concludes.

Time to Make a Career Change?

Leaving the Family Business to Pursue Your Dreams