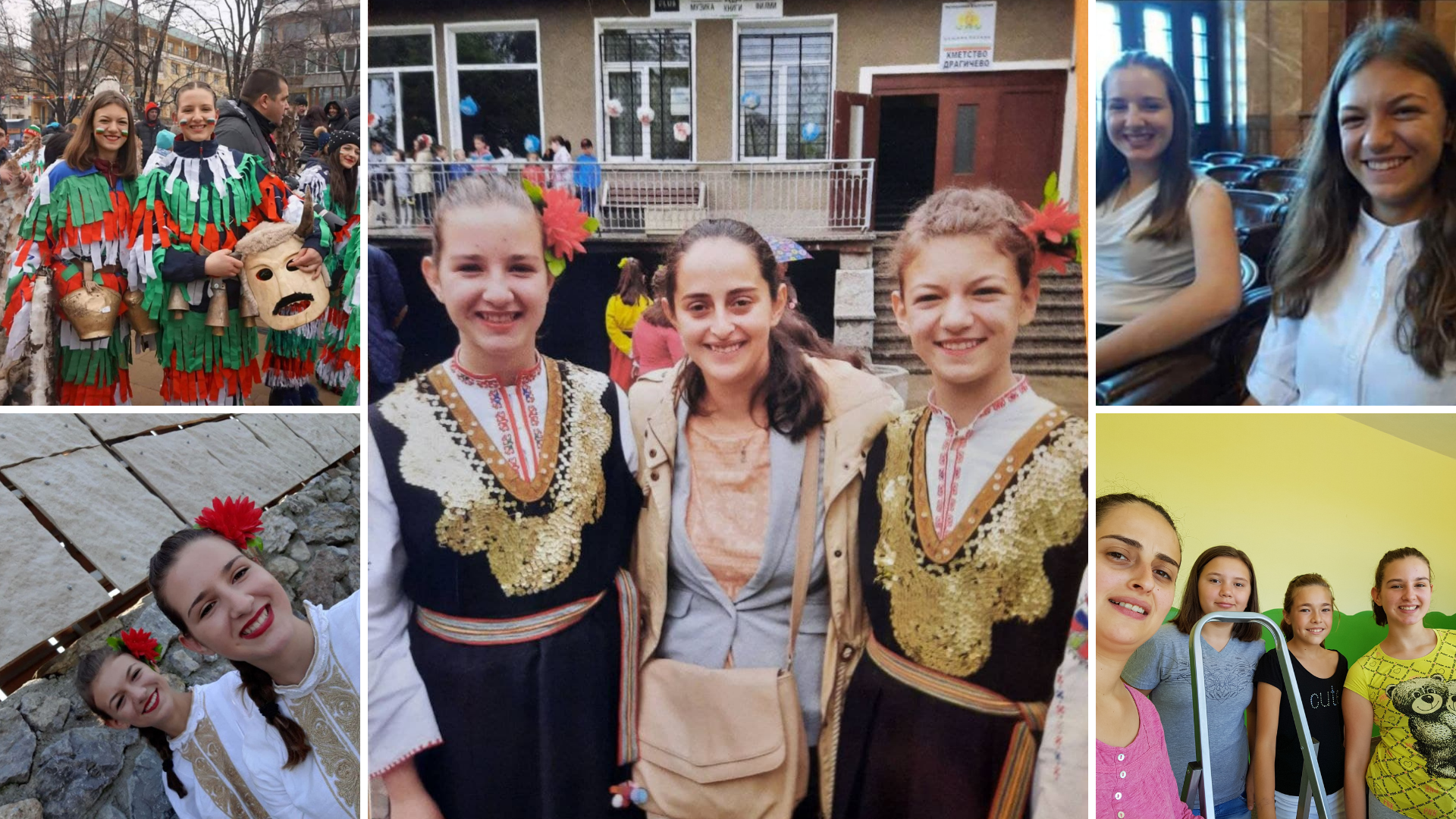 “Once upon a time…” isn’t that how fairytales begin? Stories just as magical as those we remember from our childhood are still being written to this day. Stories with strong characters, beautiful princesses, and important life lessons. Out of all contemporary stories, I like the ones about successful teachers and students the most! This is the kind of story I am about to tell you in the next lines. A story about a teacher’s love for history and passion for teaching. A story about the powerful connection between the students and their teacher. A story about knowledge, wisdom, and gratitude.

Back in 2016 Antonia Guryanova joined the 6th class of participants in Teach For Bulgaria’s program A New Way to Teaching. She was hoping to start teaching in the village of Dragichevo in the region of Pernik and her wish came true! In September of the same year she became the after school teacher at Primary School “St. Cyril and St. Methodius” in the village and during the following school year she was able to start teaching history as well. Five years later, in 2021, Antonia became the vice principal of the school. Back in 2016 when she was a beginner teacher Antonia met her very first students and instantly fell in love with them. She also found the two main characters of this story in one of the classrooms in the small village school – Aleksandrina Ivanova and Gabriela Todorova.

“I don’t know if Mrs. Guryanova realizes just how much she has contributed to my personal development! Does she really?! Yes, she is my teacher, she’s happy for my successes, she’s always believed in us, but I don’t think she knows how crucial she has been to me and to what I’ve become… I owe it all to her and to the fact that she was ever in my life,” commented Gabriela.

Hire motivated teachers like Antonia! Submit the vacant positions at your school here.

Gabi and Aleks grew up in the village of Dragichevo. They had been friends since childhood, they were classmates at school, and they both dreamed about continuing their education together. History was not their favorite subject because they mainly associated it with learning dates and facts by heart just to pass yet another test. This changed soon after Mrs. Guryanova came to their school. She inspired them so much that they not only loved history, but continued their education at one of the best schools which specializes in history in Bulgaria – the National High School for Ancient Languages and Cultures.

How did that happen?

Life in Sofia was suffocating for the free-spirited Antonia who graduated from 18th Secondary School “William Gladstone” and decided to pursue her higher education in the UK. The choices she made after that led her to Teach For Bulgaria. While the placement team was looking for a position for her, she found out that there was a vacant spot at the school in the village of Dragichevo. Several months later Toni and another three participants in the program started working at Primary School “St. Cyril and St. Methodius”. Toni’s family’s villa in Dragichevo quickly became her new home. She started living in the cozy village and enjoying her spacious yard, the view of Vitosha mountain, and the nearby forest. She was visited by her students dressed as Koledari, Survakari, and Lazarki during the holidays (traditionally in Bulgaria children and teenagers perform initiation rituals or rites of passage into adolescence around Christmas, New Year’s Day and Easter) and during her free time she visited the local celebrations where her students often performed.

“Mrs. Guryanova was a true inspiration! She was the youngest teacher at the time, not that age matters, but her vision about education was different. Her intelligence and the fact that she had studied in England definitely played a role. She managed to introduce a modern approach to education and quickly became everyone’s favorite teacher,” shared Aleksandrina.

One of the things that Toni did differently was to shift the focus of the learning process. She believed it was important for her students to draw general conclusions based on historical events and figures – something that would be useful to them both in the present moment and in the future. Her students had never read historical sources, worked with maps, analyzed information, or created what-if hypotheses before. Her main purpose was to “teach history and develop their key skills at the same time – literacy and analytical skills”.

“I knew that they didn’t like history, but judging from their engagement in class, I thought I was doing well. The girls worked diligently on their tasks and they didn’t seem to hate my assignments. I was actually shocked when they told me about their plans to go to the National High School for Ancient Languages and Cultures… this was a very sharp turn!”, said Antonia.

Her efforts soon paid off and her students changed their negative attitude towards history. Gabi recalled that Antonia piqued her curiosity from the start and made history classes much more enjoyable. The girls were in seventh grade at the time and had to learn about Antiquity which Toni presented as a fairytale combined with interesting tasks. Aleks and Gabi’s interest grew stronger with each class.

“Everything was interesting to me! Mrs. Guryanova got me excited about past civilizations. One morning Aleks came to me and said, “Gabi, I found a high school which doesn’t require an entry exam in mathematics, the entry exam is in history and you also need to have good grades in Bulgarian language and literature!” History was already interesting to us, so I said, “Let’s go for it!” And while we were preparing for the exam I realized how much I had come to love history and how much I wanted to keep learning.”, shared Gabriela.

The majority of the children in Dragichevo usually went to high school in the nearby town of Pernik. Four years ago, Aleks and Gabi were planning to do the same. Their courage to travel to Sofia every day in order to go to “a more elite school” was quite uncommon for the village. Imagine that your friends and family lived in Pernik, your teachers wanted you to go to Pernik, and you grew up thinking that you would go to Pernik – wouldn’t that make your choice not to go to Pernik courageous? It could be really tough to be courageous and to follow your dreams.

The preparation for the entry exam at their dream school in Sofia was tough for all three of them – the two students and their teacher. Toni did a lot of research – how to apply, exam format, study resources. Her students dedicated their time to diligent studying.

“We wouldn’t have made it without Mrs. Guryanova! She was the one who organized our schedule and spent her Friday afternoons with us, so that we had enough time to prepare. We learned how to work with historical maps, how to answer historical questions, we did tests, wrote plans, and she gave us feedback… We didn’t start preparing for the entry exam until the beginning of the second semester in seventh grade, so we only had a few months! Thanks to Mrs. Guryanova, we were able to get into our dream school. I got 5.5 (out of 6) on the history exam and collected 81 points!”, said Gabriela.

Aleks and Gabi described their journey from Dragichevo to the National High School for Ancient Languages and Cultures as “an adventure and a challenge”. The two girls struggled with insecurity and fear of change. Antonia, however, was with them the whole way, supporting them academically and emotionally. She helped them gain confidence.

“I’m grateful for what she did to help us prepare, for her effort, but most of all for being the first person who actually believed in me! I was very insecure when it was time to apply for the National High School for Ancient Languages and Cultures, I wanted to give up quite a few times. I thought I would have a very hard time, even if I was able to get in, but she was the one who helped me out. I am very grateful because if it hadn’t been for her, I would probably not be where I am today!”, shared Aleksandrina.

The historical flavor of the girls’ dreams helped them bond with their teacher. All three of them visited the annual doors open day at the National High School for Ancient Languages and Cultures. Mrs. Guryanova was also with the two girls and their parents on the day of the entry exam. When it was time for the results to come out, the teacher said that she was more excited than she would have been if she was waiting for her own test results.

Aleks and Gabi are currently in 11th grade and despite the new friendships, teachers, and school, still keep in touch with their former history teacher. They have lots of dreams and plans for the future which they hope to be able to accomplish in Bulgaria.

So far Gabriela hesitates between two dream jobs – to be a teacher or a graphic designer. She is, however, adamant about one thing – she wants to live in her home village of Dragichevo. She loves her life there, her parents, and her friends. She loves history even more and believes that “we cannot move forward without knowing our past; we cannot keep our traditions without knowing where they come from; we should not repeat past mistakes. Politicians should also study history very well, I hope they do!”

Aleksandrina is adamant that she’ll become a teacher very soon. She wants to major in Bulgarian philology and teach at a secondary school somewhere in Pernik. She draws inspiration from Mrs. Guryanova and her Bulgarian language and literature teacher at the National High School of Ancient Languages and Cultures.

“I want to motivate my students and be a role model for them because teachers should lead by example. I want to show them a different perspective, to get them to learn more, and to give back,” commented Aleksandrina.

If you want to hire new motivated teachers from Teach For Bulgaria’s program A New Way to Teaching, submit your vacant positions now.

Support Teach For Bulgaria’s work by making a donation!

This allows us to provide professional support to more teachers and schools in Bulgaria.